At the request and behest of our esteemed guest, who arrives just too late and right on, we exemplify how the olden times are the besten times, with music from the turn of the Swingin’ Century, slowly evolving as have our petty mindsets. Some political rations and weird subsidies later, you arrive in the Strangeland.

So stick around for the BONUS segment where fellow Revengerist Dr. Tasty reacts to the show and current events, and lo, the Earth mightily trembles.

Stranger in a Strange Land 2012-06-16: Olde Times are Goode Times by The Stranger on Mixcloud

Romney blurted out more of his anti-American anti-government anti-populist anti-worker conservative rhetoric. We already know that he “likes being able to fire people,” wants to privatize formerly public fields so that unregulated industries can sap the life from the Public, and now he’s also aiming at “firemen, policemen, and teachers.”

Indiscriminate privatization, and the greedy politics of unfettered selfishness, will bankrupt and destroy this economy, this country, and the American people.

All the more reason to believe that the GOP is doing this on purpose.

Be it ideology or stratagem, the GOP has blocked pro-growth policy and backed job-killing austerity – all while blaming Obama.

“The single most important thing we want to achieve is for President Obama to be a one-term president.” -Senate minority leader, Mitch McConnell

Republicans will do anything, including short-circuiting the economy, in order to hurt Obama politically.

Then again, it’s a hard accusation to prove: after all, one person’s economic sabotage is another person’s principled anti-government conservatism.

Republicans have opposed a lion’s share of stimulus measures that once they supported, such as a payroll tax break, unemployment insurance, bargaining against the interests of Americans (or holding their needed public services or national credit rating hostage) to keep tax cuts for the wealthy.

Republicans have made practically no effort to draft comprehensive job creation legislation. Instead, they continue to pursue austerity policies, which reams of historical data suggest harms economic recovery and does little to create jobs.

The new leak follows substantial controversy surrounding the secrecy of the talks, in which some members of Congress have complained they are not being given the same access to trade documents that corporate officials receive.

The newly leaked document is one of the most controversial of the Trans-Pacific Partnership trade pact. It addresses a broad sweep of regulations governing international investment and reveals the Obama administration’s advocacy for policies that environmental activists, financial reform advocates and labor unions have long rejected for eroding key protections currently in domestic laws.

China, of all places, has just released a report on the (lack of) human rights over the past year in the U.S.A. Are we living in an authoritarian society without knowing it? Via China Daily, and they would know!

Whatever the deep reasons for the (Occupy) movement are, the single fact that thousands of protesters were treated in a rude and violent way, with many of them being arrested – the act of willfully trampling on people’ s freedom of assembly, demonstration and speech – could provide a glimpse to the truth of the so-called US freedom and democracy.

While advocating press freedom, the United States in fact imposes fairly strict censoring and control over the press and “press freedom” is just a political tool used to beautify itself and attack other nations. The US Congress failed to pass laws on protecting rights of reporters’ news sources, according to media reports. While forcibly evacuating the Zuccotti Park, the original Occupy Wall Street encampment, the New York police blocked journalists from covering the police actions. They set cordon lines to prevent reporters from getting close to the park and closed airspace to make aerial photography impossible. In addition to using pepper spray against reporters, the police also arrested around 200 journalists, including reporters from NPR and the New York Times

Even the Russians now know our press (non)freedom is a joke:

“They just put handcuffs on me. I tried to tell him that I am a journalist. He pulled out my State Department accreditation and asked whether I have a New York police one. Unfortunately, that one expired,” explained journalist Kirill Belyaninov.

The reporter has been working in the US for the last three years.

“Whatever proof you have – they don’t really care. It’s just business, and your credentials can’t really protect you,” he said.

Sent through a whirlpool -like legal system, the seasoned journalist was treated as a protest participant under arrest. 24 hours behind bars, a quick trial, 600 dollars in fines were his punishment – for doing his job – covering the news of the day. And then there were the two days of community service and six months probation.

It’s just a matter of time before any non-corporate citizen journalist is automatically branded a terrorist. Though we now know that Americans Are as Likely to Be Killed by Their Own Furniture as by Terrorism!

According to the report, the number of U.S. citizens who died in terrorist attacks increased by two between 2010 and 2011; overall, a comparable number of Americans are crushed to death by their televisions or furniture each year. This is not to diminish the real–albeit shrinking–threat of terrorism, or to minimize the loss and suffering of the 13,000 killed and over 45,000 injured around the world. For Americans, however, it should emphasize that an irrational fear of terrorism is both unwarranted and a poor basis for public policy decisions. 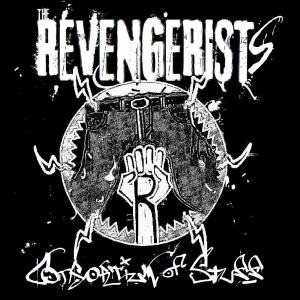 Also, enjoy this BONUS nugget of the Stranger in a Strange Land, guest starring the one-and-hopefully-only Dr. Tasty! The founding members of the Revengerists (Consortium of Stuff) are together again to discuss the minutiae of time distortion, powers, current events, robot apocalypse, world-ending cataclysms, crime-fighting, affinity groups like the Cacophony Society and other subversive underground organizations, and the 10 weirdest urban ecosystems on Earth.

Stranger in a Strange Land 2012-06-16: Revengerize with Dr. Tasty! by The Stranger on Mixcloud